The 8 assays that the FoodID Antibiotic Residue Test detects are the following antibiotics or classes of antibiotics:

The manufacturer of this product is ISO 13485:2016  and MDSAP certified.  This product was developed under GMP 21 CFR Part 820 regulations and requirements for Good Documentation Practice.

Principles of the Test

The FoodID Antibiotic Residue Test consists of eight (8) immunoassays in a lateral flow format.  Each assay utilizes visual labels attached to monoclonal detection antibodies in a competitive format to quantify the amount of target analyte present in a test specimen.  The visual signal created by the assay is detected by a camera-based reader platform which compares the detected signal against a lot-specific factory calibration to produce a result. This method allows for the quantitative measurement of an analyte in a given specimen.

These antibody reactions are extremely rapid and each antibody is specific for a given antibiotic compound or class of compounds. This results in an extremely rapid measurement of multiple analytes simultaneously, making the FoodID test kit well suited for testing for the presence of antibiotics in animals, in a production environment.

The Lower Limit of Quantitation (LLOQ) and calibration substances for each assay for buffer solution and urine can be found in Tables 1 and 2 below.

An analytical reactivity study was performed to determine the level at which related substances within an antibiotic family are detected by the The FoodID Antibiotic Residue Test.  This test is a demonstration of the specificity of the test kit and provides an understanding of how other related compounds present in the sample would affect the measurement.  The various substances and concentrations tested can be found in Table 3.  The data demonstrates that the FoodID Antibiotic Residue Test will respond to compounds in the same class as the test substance and to which extent, as a percentage of signal, the kit will respond.

Substances were prepared gravimetrically in buffer (weight/volume) and tested on the same day.  Any substance which yielded a result outside of the calibration range was titered and re-tested to determine the percent reactivity as compared to the standard calibration substance.

A cross reactivity study was performed  to determine the level at which substances from other  antibiotic families are detected by each assay on The FoodID Antibiotic Residue Test.  This data is important because it demonstrates that the kit will not provide a positive response when other antibiotic compounds are present.

The various substances and maximum concentrations tested can be found in Table 4.  Substances were prepared gravimetrically in buffer (weight/volume) and tested on the same day.

For each assay, no cross reactivity was observed for any of the substances when present up to the maximum concentration listed in Table 4.

A study was conducted to determine the reproducibility of the FoodID Antibiotic Residue Test  by evaluating the signal precision across multiple replicates of two different samples.  The testing was performed by 2 different operators across 3 days with a single reader.

The 8 assays on the FoodID Antibiotic Residue Test are all competitive format.  Because competitive assays rely on analytes in the sample competing for binding sites on the detection antibody, test line signal strength decreases with increasing analyte concentration.  This results in a negative sample yielding the largest signal strength as demonstrated in the example below.

Two studies were performed to determine the correlation of results obtained by the FoodID test platform against the standard liquid chromatography/mass spectrometry (LC/MS) method. The data from this study demonstrate that the results from the FoodID Antibiotic Residue Test compare very closely to the LC/MS results.

Multiple concentrations of antibiotic substances were prepared gravimetrically in either buffer (Study 1) or pooled bovine urine (Study 2).  Samples were prepared and tested on the FoodID platform prior to submission for analytical testing by mass spectrometry.  For Study 2, the prepared pooled bovine samples were processed with the FoodID urine processing kit.  The urine processing kit allows for enhanced detection of the concentration of antibiotic substances through a concentration method while simultaneously eliminating substances with potential to interfere with the testing process.

Results for both methods were compared and the reported correlation coefficients can be found in Table 5 below.  Excellent correlation to mass spectrometry was seen for each of the assays on the FoodID test.

Table 6.  Correlation results between the FoodID platform and mass spectrometry.

Several field studies have been performed comparing conventionally raised animals with naturally raised/no antibiotics ever (NAE) animals.  These studies were performed on cattle and hogs.

In the first study on cattle, the FoodID Platform was used to test 20 conventionally raised cattle, with some known treatment history.  For each animal, four (4) matrices (urine, kidney, liver and muscle tissue) were tested on the FoodID platform for each of the eight (8) different drug families. The tests were conducted in the slaughter facility by four individuals that were blinded to the treatment history of the sample. Subsequently, all urine samples and target tissue from 10 of the animals was tested by an outside lab using mass spectrometry.

In total, across the 298 matrix-analyte results, the following are FoodID’s results compared with the mass spectrometry results.

The FoodID Platform was used at the slaughter facility to test 16 conventionally raised hogs, in two groups of eight (8), for each of the eight (8) drug families.  Three different antibiotics were administered to the two different groups with various withdrawal times ranging from 1-5 months. Testing was performed on urine, kidney, liver and muscle tissue by two individuals that were blinded to the treatment history; a single determination was made for each drug per animal.  Afterwards, the results were compared against the actual treatment history and the results are presented in Tables 9 and 10.

The FoodID Platform was used to test either urine or kidney from 71 hogs at a slaughter facility.  Tests were administered over three days by four different meat company staff veterinarians who were blinded to the treatment history.  Each sample was tested using the FoodID testing platform for each of the eight (8) drug families.  FoodID identified 7 of 8 conventionally raised animals, and 6 of 13 therapeutically treated animals with one false positive.  A summary of the results can be seen in Tables 10 and 11.

The FoodID test is well suited to addressing this problem.  Test performance (sensitivity, specificity and precision) is similar to that of mass spectrometry. And it’s usability and rapid, near real time nature means that testing can be performed with aggressive sampling, in manufacturing facilities.

The following tables show the detailed side by side results summarized in the “Correlation to Mass Spectrometry Results” section of the document. 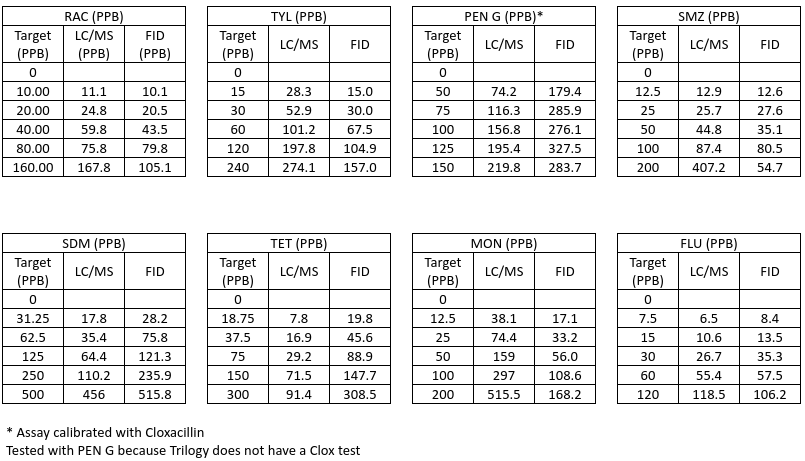 Are you passionate about food safety? Want to keep up to date on meat testing and the use of antibiotics in livestock production? Sign-up to receive notifications for articles we’ve been reading and company updates on our journey to build a future where everyone knows what’s in their food.